The modular design of the Permylene membrane system allows for easy, incremental expansion if needed and can be easily integrated with other process systems in the plant.  The Permylene system can also be hybridized with existing distillation systems.

Designed for continuous operation, Permylene's processing capacities can meet any industrial olefins separation requirements due to its modular equipment design.  The fundamental system building block, the Permylene membrane element, can process between 30 and 100 kilograms per hour (depending on the application).  System size and performance is then tailored using a number of these elements in series or in parallel as required.

Permylene demonstrates outstanding selectivity for separating olefins from their mixtures with paraffins or other gases.

Imtex has taken great care to maximize performance, stability, efficiency, ergonomics and ease of operations and maintenance in its system designs. The modular nature of the Permylene membrane technology enables the system design to be both flexible and scalable. Permylene joins the trend of membrane technologies being employed more extensively in industrial gas separations such as carbon dioxide removal from natural gas, air separation, hydrogen removal from syngas, etc.

Key characteristics of the Permylene system:

Imtex has been working for a number of years to make Permylene membrane systems ready for commercial applications. If you are interested in a demonstration at your location.

Compact Commercial System Design For Capacities From 200 to 1,000 kg/h 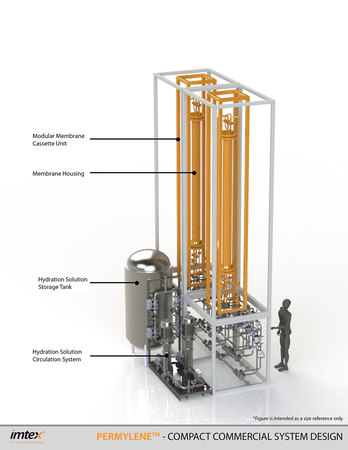 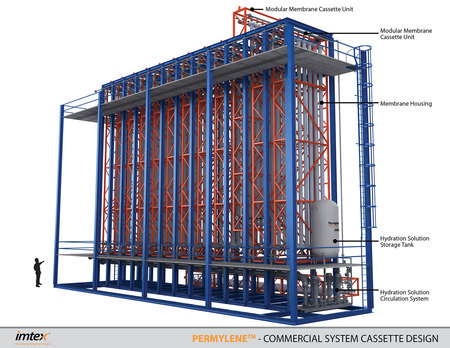 Permylene membrane systems are ready to be demonstrated on plant process streams at any facility around the world with an easy to ship and install, ready to operate demonstration system. Permylene demonstration systems feature a completely automated process with data acquisition and remote monitoring capabilities in a compact package.  Two system sizes are available depending on the required demonstration feed flow rate and available facilities.

Arrange a Demonstation at your Facility

Permylene's small scale demonstration system is skid mounted with a maximum total weight of 200kg allowing for ease of deployment.  It utilizes representative Permylene membrane elements that are smaller than the standard commercial size elements making it more suitable for smaller stream flows.  It can be designed, manufactured and certified for suitability in any global location.

The Permylene pilot demonstration system is designed for the use of full size commercial membrane elements for stream flow rates of 3 - 30 kg/h.  The system benefits from a low operating cost for continuous operation and is certified for suitability in any global location.  Its maximum total weight is less than 250 kg and it is skid mounted for ease of deployment.