Permylene membrane technology is poised to initiate a technological leap as a viable alternative to traditional high cost, energy intensive processes for olefin/paraffin separation. Permylene has recently been receiving significant interest from the refining and petrochemical industry in exploring a wide range of potential applications. 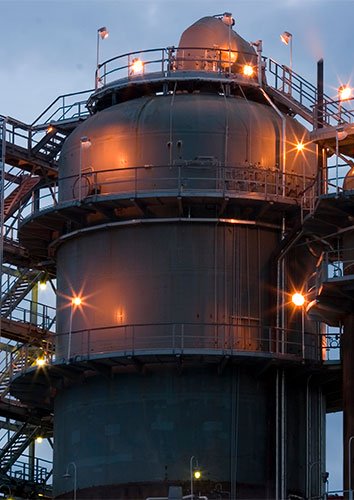 Olefins, especially ethylene and propylene, are the building blocks of many important plastics, polymers and other chemicals. As the world population grows and economies develop, the demand for olefin-based materials will continue to grow.

Major oil and petrochemical companies around the world are investing in technology to increase olefins production capacity.  These investment decisions are being supported and justified by many factors including:

Olefin/paraffin separation has traditionally been accomplished through the process of distillation. However, distillation has significant economic drawbacks, including:

For over 30 years companies in the petrochemical industry have sought commercially viable alternative separation technologies to distillation. Many attempts have been made to satisfy this need by industry R&D teams, academic researchers, government researchers and by technology providers looking to commercialize a new, more economical, environmentally advantaged technology.

Imtex is the first company to have successfully answered this need and has created the first commercially viable alternative to distillation for olefin/paraffin separation with its Permylene membrane technology.  Permylene membrane technology meets industry's need for a stable, high performance olefin paraffin separation process that is designed to withstand the rigors of long-term operation.

See our news article Permyene: ON the Cuttinng Edge of World Change?

Imtex’s Permylene process focuses on the purification of olefins (ethylene, propylene and butenes) by separating them from their corresponding paraffins (ethane, propane, and butanes respectively). Olefins are the predominant building blocks in the production of many polymers, plastics and other products. The incumbent olefin separation technology, fractional distillation, is expensive, energy consuming and polluting with high levels of greenhouse gas emissions. Depending upon the type of facility, the Permylene process would reduce capital expenditure by 30 - 75% and operating costs by 30 - 90% through improved energy efficiency, as no energy is required to boil or condense the process streams for separation. As a result, greenhouse gas emissions are also reduced by up to 90%.

Permylene offers substantial economic and environmental benefits over the distillation processes typically employed for olefin/paraffin separations, with many wide-ranging applications. 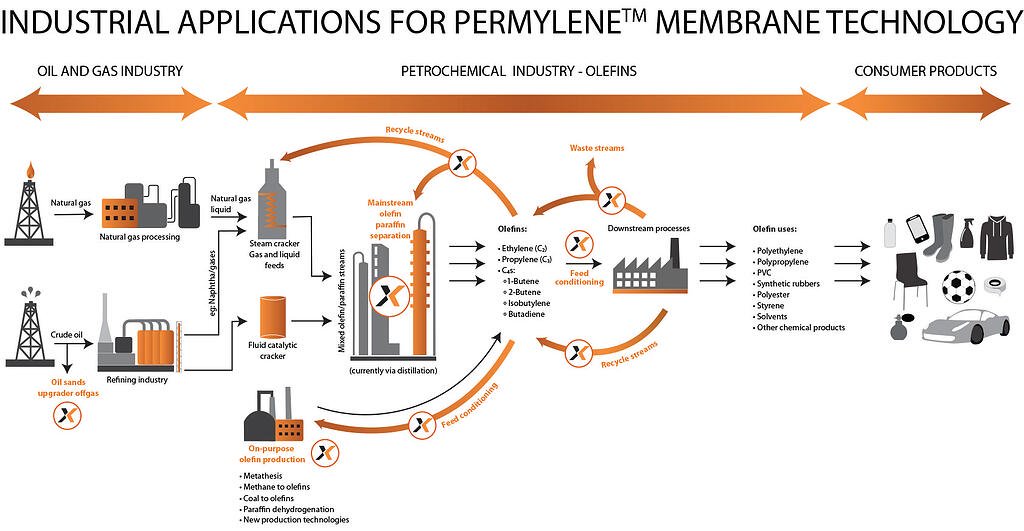 Permylene uses membranes made from chitosan for its separation process. Chitosan is a natural source polymer derived from chitin, the major structural constituent of the exoskeleton of crustaceans and insects. The membranes are designed for industrial conditions, and installed in an industry standard spiral wound membrane element format.

In a petrochemical plant, an olefin-paraffin feed mixture is fed into the membrane element which separates the gases. The process is modular and highly scalable, allowing for the installation of any number of membrane elements depending on the plant production capacity.

The robust Permylene membrane technology results in high separation performance that delivers polymer-grade olefins.  The composition of the Permylene membrane allows ethylene, propylene and other olefins to chemically interact with it, facilitating olefin transport across it while rejecting paraffins and other constituents.

Steady and stable olefin transport is achieved in continuous, non-stop operation via circulation of an aqueous silver nitrate solution over a spiral wound membrane containing a hydrogel coating.